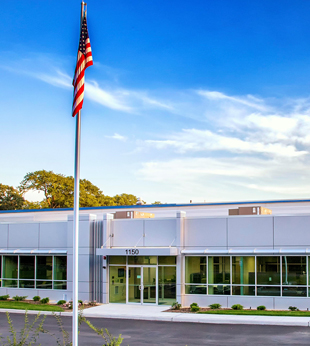 We are a dedicated team of designers, engineers and lighting specialists. Our combined 70 plus years of experience have given us the abilty to design & build custom products to fit any application our valued clients may need.

Larry “Garrin” and The Great Hurricane

In 1934, at the age of 13, Larry Goldstein needed to work, like many other boys his age did at the time of the Great Depression and its aftermath. He chose to learn the art of glass blowing, so he went to work with his cousin Julius at the Aetna Neon factory. Aetna Neon made neon signs for New York City businesses to hang outside. Because Larry was working with his cousin, and working with family was frowned upon, he had to change his last name to Garrin. While Larry Garrin worked at Aetna Neon during the day, Larry Goldstein made extra money in the evenings repairing burnt out or broken signs.

In September of 1936, the first year the United States Weather Bureau (now the National Weather Service) began recording hurricanes, there was a huge hurricane in New York. The tradition of naming powerful storms wouldn’t begin until the 1950s, so this storm was called merely “Hurricane 13.” Hurricane 13 marched up the Atlantic seaboard, hammering North Carolina and Virginia before skirting the Jersey shore and Long Island. Thankfully the storm brought very few fatalities, but it destroyed all the neon signs hanging outside buildings. Because of this, it became a law that neon signs could no longer be used outside if they were not secured down. Larry and Julius had their work cut out for them for quite a while.

In 1946, the Bowery area in Manhattan was
the main center for lighting fixtures.

This was a thriving micro-ecosystem for light bulbs, fixtures, switches, and everything needed to illuminate a home, office, or commercial building. If you needed a light, you went to the Bowery. Today this has shrunk considerably to a few blocks of Bowery Street where lighting companies and restaurant supply houses are tucked between Chinatown and SoHo.

Back then, retail stores would buy the parts for many varieties of fixtures and assemble them in-house. The most popular fluorescent was for kitchen use. A 2 x 20-Watt kitchen fixture was made with an adapter so it plugged directly into a globe receptacle. You got 150 Watts of light with two 20-Watt lamps, leading to tremendous demand. There also was a large shortage of finished metal for the assembler companies. Some of the assemblers wanted to make their own housings. There was a tremendous amount of diversity and specialization in the industry.

At that time, Fred Kelly, who had been a manager at Penn Brass during the war, took some of Penn Brass machinery as a parting gift and opened a factory on Farmer’s Boulevard in Queens. He struck deals with a few of the Bowery assemblers to make the popular kitchen fixtures, but almost five months went by and not one fixture was made. Kelly’s painting booths had never been assembled and the money for the baking oven was spent elsewhere. His investor wanted his money returned.

Fortunately, one of the assemblers knew Larry Goldstein from their days together at Aetna Neon before he went into the army. A call was made, and an agreement emerged: in exchange for coming to Kelly’s new company and whipping it into shape, he’d get a good piece of the business. Larry took the offer and a few days later reported for work at the new “Sunbrite” company.

The first change Goldstein made was to assess the equipment. Kelly had bought fancy tools and dies that would be needed for a shop producing a huge volume of fixtures each week. Refocusing the production team on making only what was necessary and what they had orders for sorted that out quickly. The other tools were mothballed for later. Within three weeks, the gas-fired paint baking oven, a used Gengrich Burners model with welded sheet steel and asbestos lining, was blasting away, ready to work. It would take a few years to buy a brand-new model, but this worked for the time being.

In a little more than four weeks, Sunbrite was producing kitchen fixture housings. The paint booths were rickety and the ventilating equipment old, but they had fixtures to sell. The major investor still had no faith in the new venture and sold his interest to Goldstein for $7000, who borrowed the money from his grandparents after signing promissory notes for the loan.

Business was pretty profitable until Circuline Fluorescent came into the market. Circuline needed spinning equipment. Spinning factories were too expensive to contract with, and too busy to help a small business. Kelly and Goldstein bought two old spinning lathes and Kelly built all the necessary spinning tools, something right up his alley. The lathes worked sixteen hours a day.

Around this time, General Electric and Sylvania, the bulb manufacturers, brought a full line of fluorescent tubes into the market. These required eight-foot shears and eight-foot forming tools (brakes). This would prove to be the next challenge for Sunbrite.

Facing a tough time securing a bank loan, Goldstein decided to approach the Reconstruction Finance Corporation (RFC), a relatively new federal bureau tasked with lending money to large corporations. Never one to let the middleman do his work, Larry Goldstein pressed his suit and went to Washington, D.C., straight to the main RFC office. Five days later, Sunbrite had a commitment for $25,000. They were now able to buy the tools for a full line of fluorescent housings.

Within the next 18 months, the company grew to $100,000 in assets, with equipment fully paid for and carried zero debt on the books.

Getting steel from steel mills was almost impossible: they had longstanding commitments and wouldn’t take new customers. A creative solution was needed. Tonnelle Avenue, in North Bergen, New Jersey, had a few steel dealers who handled larg- size steel rejects from the auto industry. The auto industry could only draw special gauges and soft tempers. Greasing a few palms meant some of these dealers would call Sunbrite when usable sheets came in stock. The problem with the scrap steel was the brake dies needed constant adjusting to compensate for erratic gauge and temper. However, drawing small parts was impossible with scrap steel, so what little legitimate steel Goldstein could buy went for end pieces, brackets and all small parts.

Getting the scrap to the factory was another problem. The steel company would not deliver, and private truckers wouldn’t handle sheet steel, so Larry had to go there in person with cash or it was no deal. He recalls, “Going through the Holland Tunnel from New Jersey with five tons of steel on a two and a half ton truck was scary!”

Because the fluorescent housing business was booming, and because of the steel houses refusal to sell to them, Sunbrite had no choice but to go along with a less-than-legitimate practice. By the time the steel market eased up and the company could finally buy consistent, quality steel from legitimate distributers, the union began pressuring them to get out of the fixture housing business. Their goal was for Sunbrite and other manufacturers to make a completely wired product and put the Bowery assemblers out of business. Assemblers of fluorescent fixtures had sprung up in many places and for Sunbrite to make a complete product would decimate the business relationships and client base they had taken such care to develop. Goldstein and Kelly were stuck between a rock and a hard place.

Birth of a new company

Morty Kugel was a musician.

A clarinet player, he had taken lessons from the same teacher as Benny Goodman, the Big Band director. He served his country in WWII on the Italian front, and returned home with some pretty bad shrapnel wounds to his arm and elbow, effectively ending his music career. He began working for Superb Lighting in Brooklyn.

Morty and his partner, Herb Obeiter, were good metal customers of Sunbrite. They were faced with the same problem, except in reverse. The union was pressuring them to combine with metal people, like Sunbrite, and make a complete product. In order to satisfy the union problems plaguing both companies, they decided to merge, joining forces to make a complete product under the name Superb Lighting.

After much deliberation, it was decided to keep the metal shop where it was and open an assembly place nearby. All the principals would be equal partners, with the metal shop as an investment and with other balancing assets coming from Morty and Herb.

The new company, operating in St. Albans, was a bust from the start. After eight months, Herb Obeiter wanted out, citing Superb’s sales model as being too restrictive for his type of contacts. It was obvious that a new path was needed. Superb Lighting, operating as a local 3 (union) factory, was a failure. The union benefitted large lighting Companies like Liteolier and those companies doing large-scale building lighting jobs, but Superb Lighting was left out in the cold.

The remaining three partners contacted Local 25, the Long Island electric union, about a possible move further east, and were welcomed with open arms. While Morty and Larry were ready and eager to relocate, Fred Kelly rejected the move. His idea was to supply what would become a new company—LaMar Lighting—with metal. Supplying LaMar along with a few out of town metal customers would be enough to keep Kelly’s metal shop intact. In that way, he could stay in St. Albans.

Morty stumbled on an old two-story factory building, with an elevator, in Garden City South. LaMar lighting now had a location, and a new company was born.

For a short time, LaMar became a stocking sales agency for a handful of out-of-town fluorescent companies. With labels supplied from Local 25, all the fixtures headed out the door were accepted in the entire Metropolitan area. Always working to meet each customer’s needs, it was occasionally necessary to open the cartons and set up the sockets and repackage them for shipping. It was steady, hard work, and Larry and Morty worked twelve hours a day in those early years to survive.

Eventually, they needed a new path, so they sold out the finished stock and got out of the product supply side of the lighting business. Through some beneficial agreements, both with Kelly and other metal suppliers, LaMar was back in the assembly business.

The company stayed in Garden City South for two years, after which they outgrew the space. The next move took the young company to new buildings in Freeport in 1962, where they assembled the full line of fluorescent fixtures.

In the mid 1980’s, Larry’s son Jeff, and Morty’s son Barry began the succession process to assume the leadership roles. With a continual eye towards the future, the second generation made a move to a new larger location in 1994 that would accommodate a state of the art metal fabrication operation, increased manufacturing capacity, and larger more efficient warehousing and distribution. Coupled with growth into new technology, new products and new markets, the company moved forward for the next 30 plus years.

Now over 60 years since Larry and Morty started their humble fluorescent lighting company, Lamar Lighting has progressed into a full fledged LED lighting producer (LAMAR LED) with a continually growing line of products, while still maintaining the ‘family’ based focus on quality and service that set the company in motion in 1957.

LAMAR LED HAS YOU COVERED

Questions or Concerns about a product?